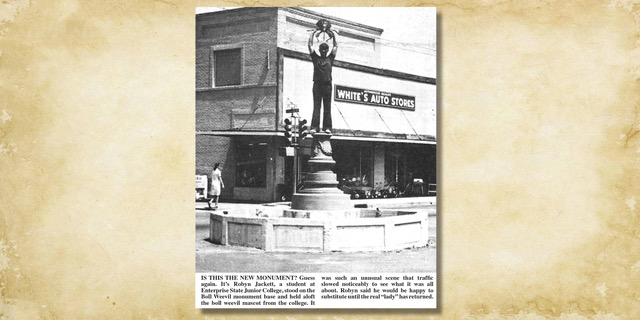 Mrs. Rosa Quattlebaum and Mrs. Seroba Marsh, representing the women’s civic clubs of Enterprise, told the City Council that an extensive rehabilitation would be required for the Boll Weevil Monument within a few years. Mrs. Marsh proposed that a permanent commission be established to provide for the care and maintenance of the monument. Bob Sanford of the local metal manufacturing company ALFAB, in charge of repairing the monument after its recent theft, told the council that the monument could not take more damage. He said the body was made of pot metal and composed of some 50 to 60 pieces whose joints were leaded together. After years of exposure to the elements, the joints were coming apart. Council President John Lester named committee members to establish a Boll Weevil Monument Commission. (The Daily Ledger, May 22, 1974)