She’s been the centerpiece of downtown Enterprise for 100 years, persevering through rain, wind, snow, heat and sometimes, even thievery and abuse. But she continues to do her job dutifully, standing tall with raised arms reverently holding the contrasting form of an ugly bug. 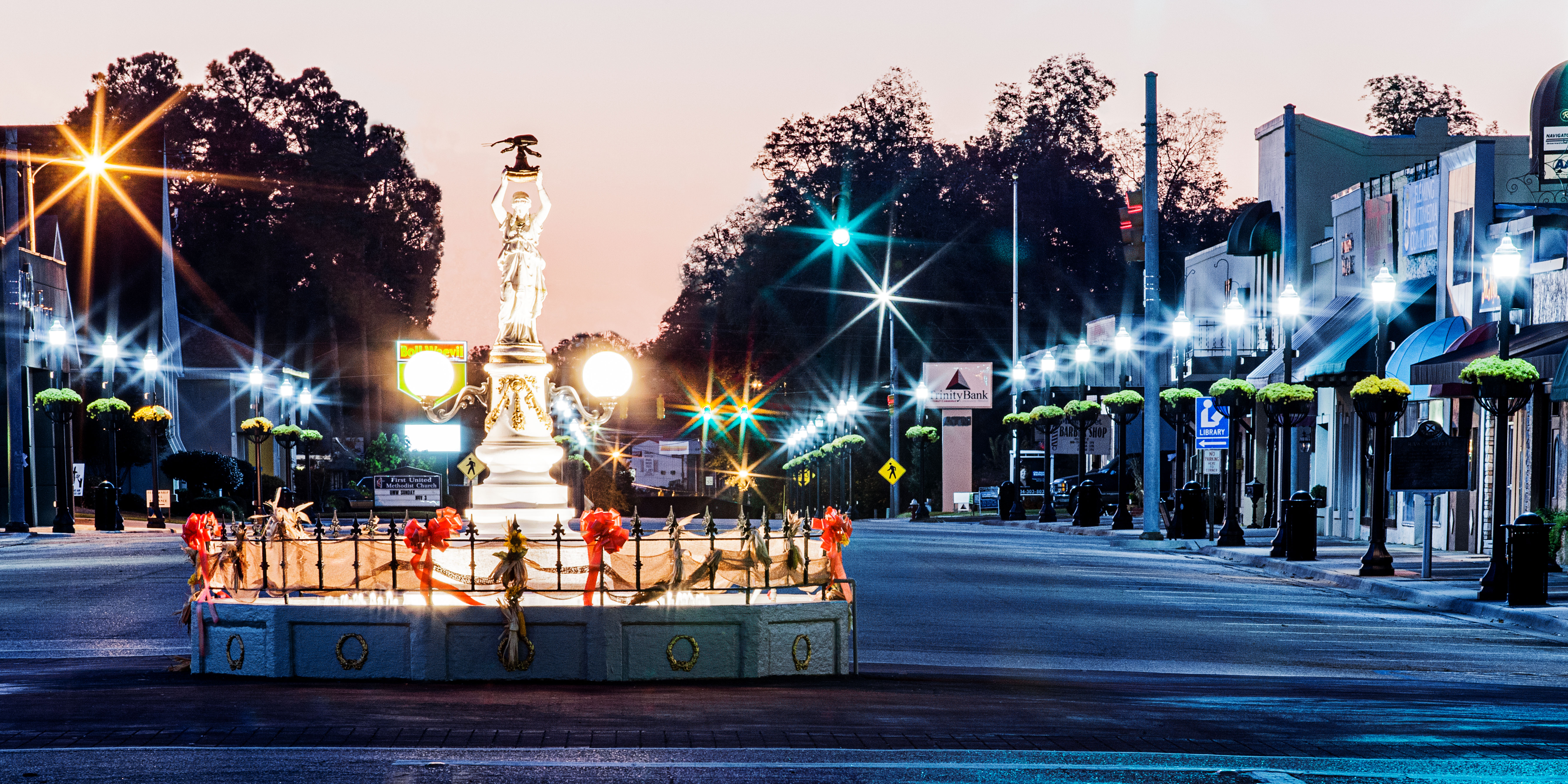 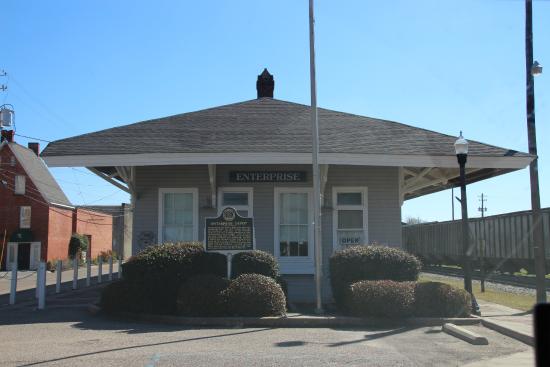 The Museum, located in the old Enterprise Railroad Depot directly behind the Gift Shop and Library, is
a treasure trove of artifacts from the late nineteenth century until the present. Its collection includes
period garments, agricultural implements, furniture, and weaponry. It is the ideal site to become acquainted with the culture of the Pea River region of Alabama. The building itself is of historic importance. The Museum is open to all, but it especially welcomes school groups and other who are trying to learn the history of Alabama and its Pea River Region.
Read More

Along with family, friends and fellow Scouts from Boy Scout Troop 150, Eric Seanard spent hundreds of hours recording data from more than 2,000 grave markers at the historic cemetery and transcribing it into lists by zone of the cemetery, date of birth, date of death, alphabetically and by military service, if applicable. Seanard’s project—found in hard copy and digital format at the Pea River Historical and Genealogical office on Main Street—includes any inscriptions recorded on the grave markers and a photograph of each grave marker. 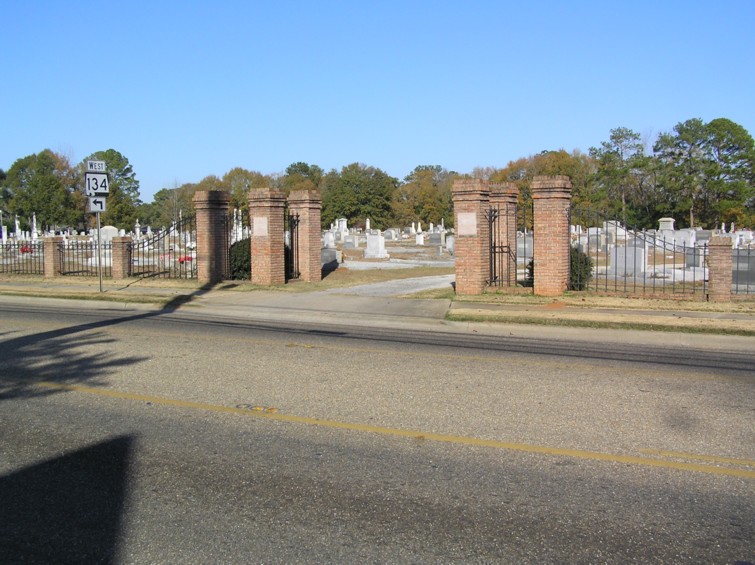 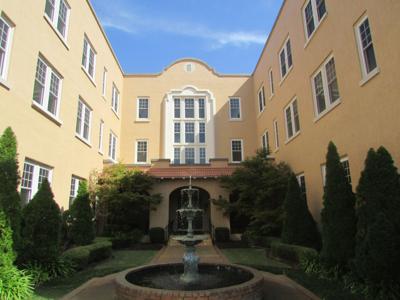 Located in the heart of downtown Enterprise, Alabama, just a block from the world famous Boll
Weevil Monument, The Rawls is a cultural epicenter – from the railroad of yesterday to the cutting edge technology of today; rediscover the experience. The Historic Rawls Hotel was founded in 1903. The restaurant combines fine dining with a casual atmosphere in the beautiful setting of a historic landmark.

The Society has a working office and gift shop in which souvenirs, books, maps and brochures of interest about places and things to do in Alabama are available as well as holds the Society’s Library where historical records such as periodicals, maps, and books about the Pea River Region are housed.  The Library contains many historical books, family sketches, photographs and other memorabilia about days gone by. The Gift Shop offers souvenirs including pins, caps, shirts, mugs and magnets, along with historical and genealogical books by local authors. 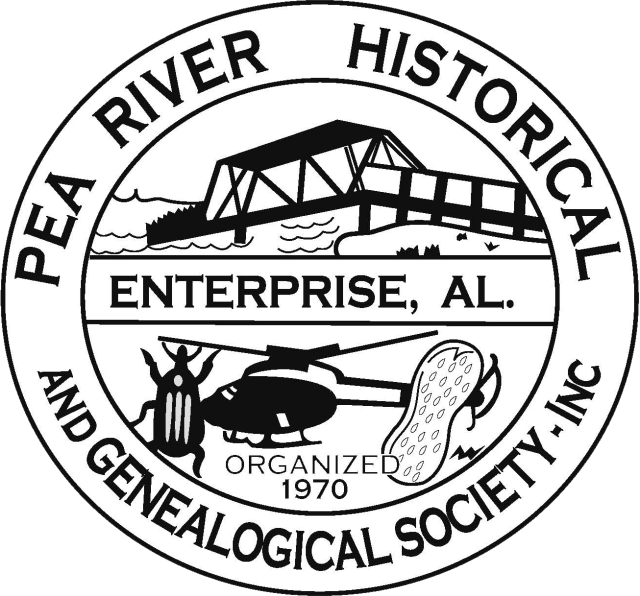 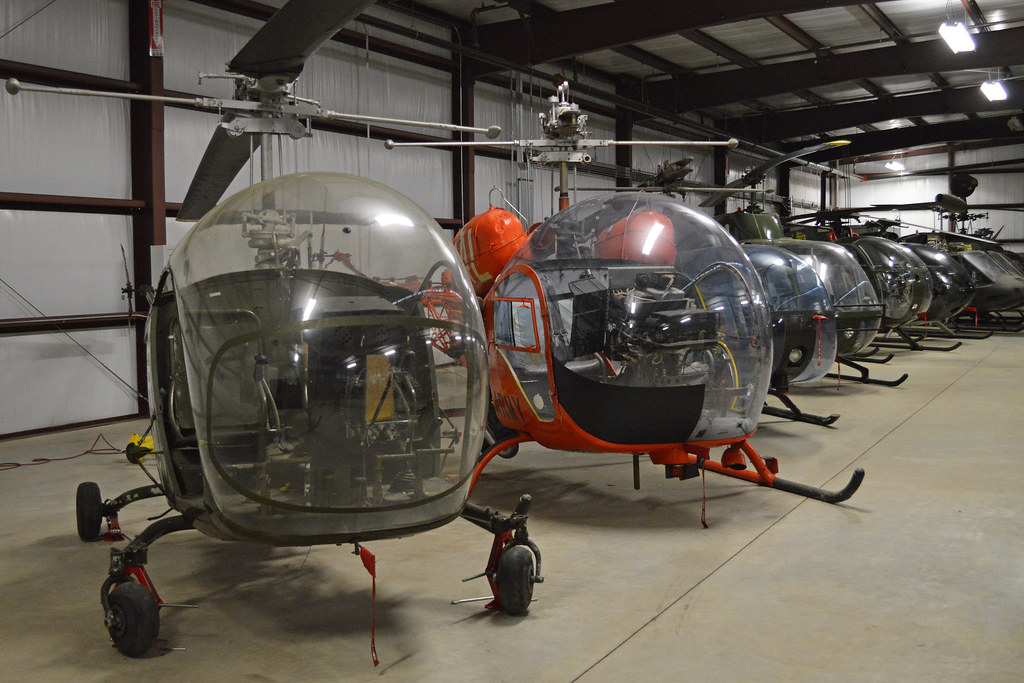 Maintains a collection of over 164 military aircraft, including one of the largest collections of military helicopters in the world. Public galleries include aircraft from the early days of aviation through today’s high-tech machines flown by Army aviators today (manned and unmanned).

Standing proudly at the intersection of Park Avenue and Plaza Drive is a monument dedicated in honor of aviators past, present and future. This sculpture in the likeness of Captain Jerry Stripling was constructed and dedicated in 1972 by the Daffodil Garden Club. The monument was originally planned in remembrance of Vietnam aviators, but has since become a tribute to all aviators who serve and protect the United States. Military clothing items were sent to the artist in Italy for accuracy and the statue was carved from a single block of marble by the Travarelli Marble Company in Carrara, Italy. Maj. Gen. Allen M. Burdette Jr., was serving as the commanding general of the Army Aviation Center and selected Capt. Jerry Stripling to be the model for the new statue. Stripling served as an aviator with two tours in Vietnam and was awarded a Bronze Star and oak Leaf Cluster and was awarded 22 Air Medals and two Purple Hearts. The monument was actually carved twice after breaking on its return trip from Italy. But once the second monument arrived intact, it was placed at its current site and stands as a tribute to all Army aviators. The Aviator Monument was officially dedicated on Nov. 10, 1972 with Frances Nichols, Griffin’s mother, giving the dedication speech. The monument, which is now in the historical record list of monuments in the state, is inscribed, “Dedicated to the men of Army Aviation whose gallantry and devotion to duty ensure America’s freedom.” It wasn’t until 1974, after the statue was dedicated, that the first female aviator graduated. Since its dedication, the city has put in a small area to park for access to the monument and provided lighting on the monument and parking area.

The installation and continued care for the monument and surrounding property has been a joint effort throughout the years between the city and garden club. 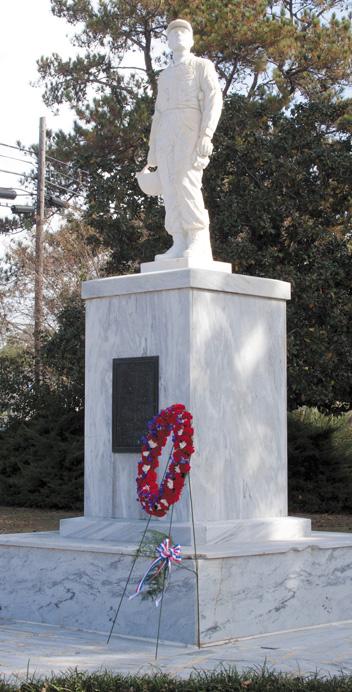 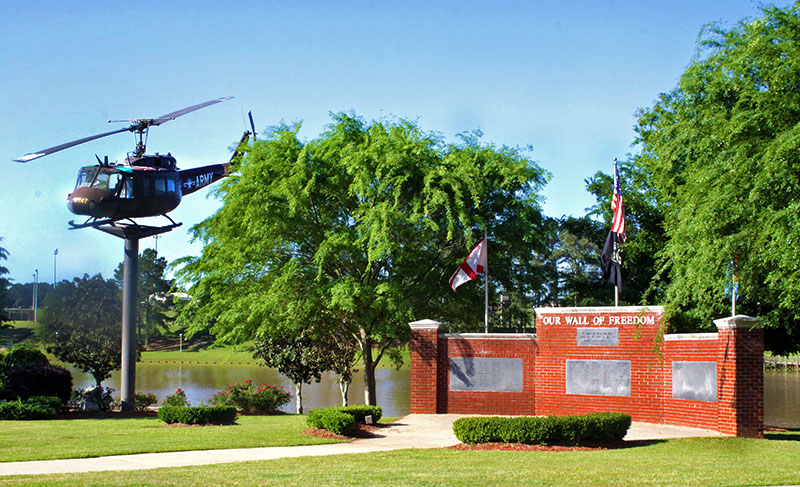 The Wall of Freedom located at the entrance of the Enterprise Recreational Complex, located on Highway 167 North, is a memorial to fallen service members from Coffee County. It is located at an entrance to the Enterprise Recreational Complex just north of the city. The wall is engraved with the names of soldiers who gave their lives in World War I, World War II, Korea, Vietnam, Operation Desert Storm, and Iraq. The memorial also features a Bell helicopter, popularly known as a “Huey,” which has come to symbolize the war in Vietnam. Nearby Fort Rucker is home to U.S. Army aviation training and is the largest military installation in the state.

A courtyard-style memorial established for the eight Enterprise High School students and a nearby resident who died March 1, 2007 in a tornado that struck Enterprise in Coffee County. Eight brick columns, each adorned with bronze plaques, are etched with each of the students’ name and a collage of photos. The columns surround a “Wall of Remembrance” with another plaque explaining the events of March 1, 2007. The inscription reads, “The loss of nine precious lives left an endearing mark on our community and on our hearts.” Alongside this is a plaque dedicated to Edna Strickland and the original 1956 Enterprise High School marker plaque. It is located on the former site of Enterprise High School in between Bates Memorial Stadium and the Hillcrest Elementary School campus. 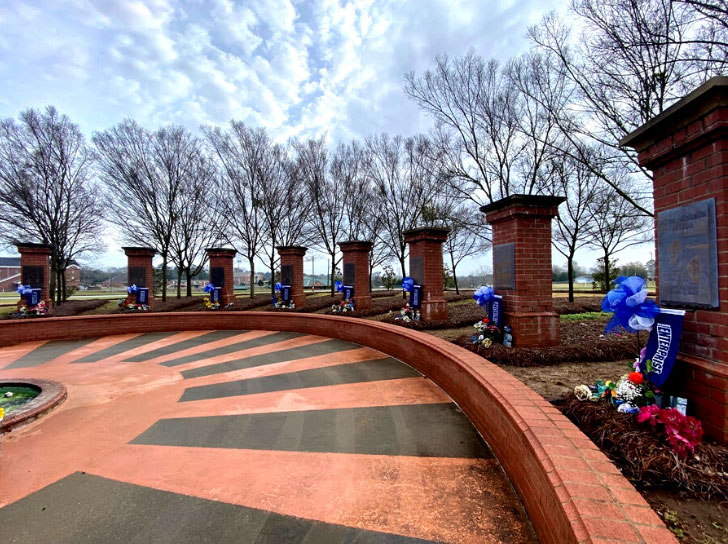